We spent an overnight in Papette - I managed to keep the room in the Hotel TAHITI NUI and spent the night ashore.

It was nice to pretend to be on vacation there for a night.  Although I must admit that if I had a load of cash to spend this would not be one of the places I would spend it on.

I am not sure what they are doing wrong as it is a real pretty place, but the atmosphere in Papette is just not welcoming. The people are nice enough and poor as church mice but they need to do something about their government. Serenity was 1 of two large cruise liners in the harbour, it was a Sunday and there were at least 2 000 people wanting to spend money but the shops were closed as the 'government' has decided that there will be not shopping on a Sunday!  Come on guys - once you have enough money to feed yourselves then you can decide when to work!!  It might also help to sort of clean up the streets a little - reminicent of India that also needs a new broom to sweep clean.

Once out of Tahiti it was onto BORA BORA - the world's most talked about place.  It is magical and the colour of the water is completely indescribable.  Even the photographs don't do it justice.  The colour is mesmerising.  This island is also poor but the people are nice and they try hard.  I was amazed to learn that they grow no food, everything is imported.  Would seem to me that they could be a little more self sufficient if they kept a market garden or two.  I spent the morning escorting a 4 x 4 tour of the island.  Wasn't exactly sure how much 'off roading' we could do, but was suprised.  We went up and down that volcano at a lick and stopped for some fabulous photo opportunities.  During WW2 the American's had an outpost here and there are still a couple of those huge guns about.  I wasn't impressed by them but the guests were and we took some pic from the vantage point.  They were apparently never fired as the ammo that was sent was the wrong size.
﻿ 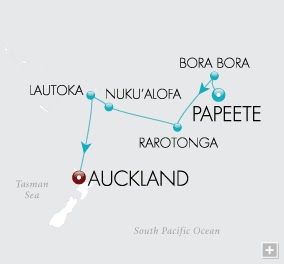 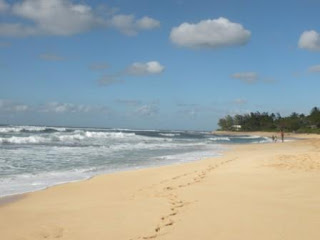 First stop of Crystal Serenity World Cruise 2011 was Honolulu.  Luckily I met up with my good freind Grace and she took me out and about. 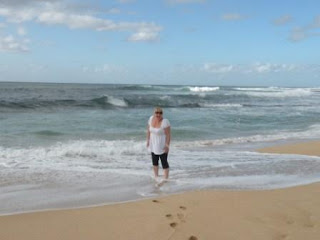 Got my feet wet in the Pacific at one of the famous beaches after trying to find one that wasn't covered in good looking bodies.....! 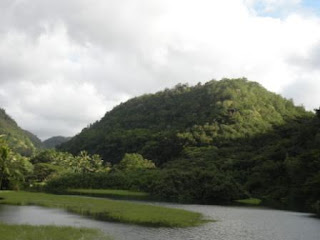 Grace came back to the ship and we all had dinner together and then went up on deck to see a local show with fabulous Hawaiian men in short skirts and some good cocktails. 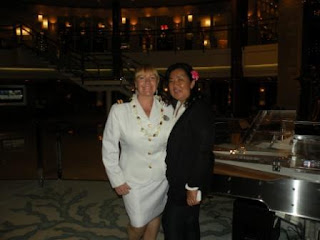 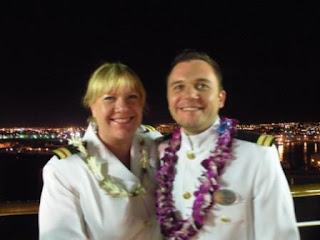 Ion and I wave goodbye to Honolulu
Posted by Sarah at 1:59 PM No comments:

Email ThisBlogThis!Share to TwitterShare to FacebookShare to Pinterest
Labels: Honolulu 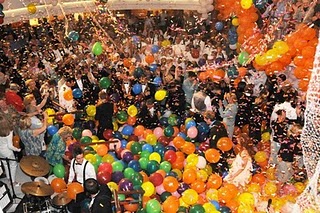 Much excitment for the start of World Cruise 2011. We all gathered in the Crystal Cove for the big BALLOON DROP which signifies the offical start of the World Cruise.  The guest line the Cove and the Crew walk down the stairs into the middle and they drop hundreds of mutli-coloured balloons onto us which we take great pleasure in popping!!
This is where we are going - amazing to think that we can travel all that way with stop overs in beautiful places, have the time of our lives and all in 3.5 months! 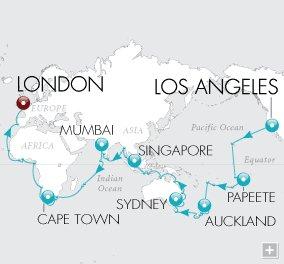