Early morning we sailed into this large bay and dropped anchor.  Nha Trang is a tender port that also requires a shuttle bus ride of +/- 20 minutes to get to the city.  Neither of us had ever been here before as in previous cruises we have stopped in Ho Chi Min City (Saigon) but I think the Queen Mary 2 is just too large to get up the river. 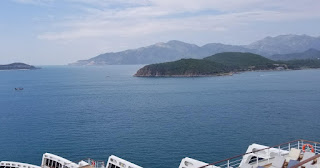 Edward and I had breakfast and decided that we would not join the exceptionally long que for tender tickets but we would wait until later and then proceed ashore.  This decided we went and found a special area on the Port side opposite the Chef’s Galley where they serve gluten and lactose free breakfast items as well as Edwards favourite French Toast with maple syrup.  We hung about the deck sitting the Corinthia Lounge playing games on our handies until about 11h00 when we decided to check the tender ticket lines.  They were almost gone so we joined to get a ticket.  They have a mat on the floor with 2 stripes 45 inches (114.3cm) apart.  You must prove that you can step over this distance before they let you take a tender ticket. If you can’t do this then you can’t get into the tender!

We got group 41 and were told to wait in the pug until called.  This only took a few minutes and we were taken down to the tender lounge to board the tender.  Luckily we managed to get onto the roof for a sunshine trip to the landing quay ashore.

The ride took about 20 minutes as well and then a 20-minute shuttle ride into the city.  We had not changed any money into Vietnamese Dong as we will only be here for a few hours.  Also, we had been on a digital diet for just over 24 hours so all we really wanted to do was get online.
Vietnam is not part of our T-Mobile World Wide Data Plan!!  Edward signed in this morning and as he was reading the T-Mobile message the charges went from $50 to $250!!!   I don’t think this can be true, but you never know. 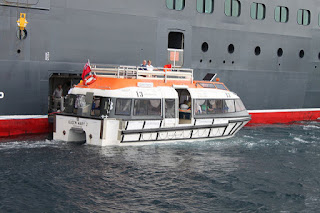 Luckily for us the shuttle bus stopped directly outside an hotel which advertised free Wi-Fi.  We went in perfectly prepared to buy coffee or something for the use of the Wi-Fi but the did not expect this and the password was freely available to everyone.  Quite lucky actually as the café was jammed packed with crew and guests all wanting some free digital time.  We both signed on and disappeared down the web for an hour.  Edward did his blog and other stuff and I downloaded ORIGIN by Dan Brown in the hopes I could listen to it on the voyage.  Once we had caught up on all online matters we took a cursory glance around the vicinity and decided, as the shuttle was there, that we would miss the rush and head back.

The Vietnamese has set up a market tall o the Pier filled with all the stuff you wonder how the hell you can live without!  Edward found a nice navy blue GOOD MORNING VIETNAM T-shirt which we bought.  Then we found a nice trouser suit which we wanted as well and instead of change we got 2 gift bags full of Vietnamese coffee complete with their version of a cup filter.

The tender boat ride back to the ship was very full and we bobbed about waiting a turn to dock against the ship.  So much bobbing going on that lots of people onboard the tender started turning green……  Everyone was relieved when we toed up alongside and were able to get off the tender.

Back on board and we took a nap.  Changed for dinner and went to the Chef’s Galley for supper.  Definitely Edwards favourite place – they make fresh pasta of various kinds with a daily special, nice garlic bread and you can bring your own bottle of wine.

The stewards are fantastic and there is a lovely South African lady chef – tiny little woman who makes a mean pasta!  It is certainly going to be one of our favourite places.   We wandered about the deck mesmerised by the moon before falling into bed for another fabulous sleep lulled by the ship moving through the water – they should make this sound into “white noise” I think!!