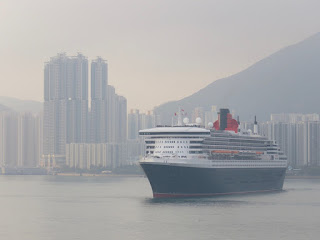 Today is the day we board the Queen Mary 2!!  Such excitement!!  We slept until about 06h00.  Had coffee and breakfast, showered, packed and waited…… it was only 7 o’clock and way, way to early to get going – we were just excited!!  We couldn’t get to the ship to early as you can’t board until after lunch.  Finally by 10 o’clock we had had enough and we just wanted to get going and couldn’t wait any longer.  So we checked out of the hotel and hailed a cab to take us to KAI TAK terminal.  Once again this drive took us to the right of where we had been and into new unexplored territory.  We went though a long tunnel and out on the Mainland and what looked like a building site.  So much building taking place in HK that it is difficult to describe.  The Taxi driver knew where we were going through so there was no getting lost and no need for Google maps either.   The long ride wasn’t expensive either costing just under HK$400 which we thought was fair.

The Queen Mary 2 and the Queen Elizabeth were both in at the same time and it’s a Saturday so there were lots of people who had come down to view both ships port side on in a line.  Looked lovely I can tell you.  The very top of the Terminal Building is an open air restaurant with gardens, so they got a good view without being too close?  AS we had expected boarding was not yet open.  Our ticket was very briefly checked and we were given a No 1 ticket which indicated our boarding group.  There were quite a lot of passengers who were transferring between ships.  I know it was about 200 passengers who came to the QM2 but not sure how many went the other way.  Edward opted to stand in a queue and I sat keeping an eye on the luggage and played games on my handy.  Edward must have been entertaining the people in line as every now and then great gusts of laughter erupted.  There was a bit of a hold up with boarding as the Hong Kong immigration authority had requested a full crew immigration inspection.  When this is done no-one can sign on or off until every last crew member has been seen.  It happens a lot in US ports but this is the first time I have heard of it in HK.  Mind you, now that I think of it this might have happened to me when I was on the Crystal Serenity and we topped in Dalian.  I remember then being struck by the conviction of the Chinese authorities that everyone wanted to live in China and if the didn’t check us all then most of us would have jumped ship!!

By about 12h30 – and just as we were about to give up – they announced that boarding would commence within 10 minutes and that they had set up a water station for those who needed H2O.  The lady sitting opposite me left her luggage, including her handbag, and rushed off.  She came back with 6 little bottles of water that she spirited away into various pockets of her luggage.  If I get like her then please shoot me……..

Finally boarding – Queens and Princess Grills first then group No1!!  I stayed in line while Edward fetched the luggage but they wouldn’t let him keep it.  He had to surrender it to a Bellman to take it onboard.  We were checked through and the young Chinese lady gave us the wrong room key.  Luckily this was instantly spotted by Edward.  Took her forever to find the correct stuff and when we checked it we noted that we were in cabin 10323 which didn’t ring a bell with me.   We boarded and checked to ensure I was correct and there is no such cabin so we went to the Medical Centre to find Bart.  He unfortunately was not there.  He had to go back to Wan Chai to collect a forgotten item!!  This meant that we were not able to get into his cabin.  What else does on doe do?  Go to lunch of course!  Off we went up to Deck 7 to the Kings Court for a Buffet luncheon.  Strong sense of de je Vue as we went and sat a the starboard rear side just as you have to do when you are working onboard. 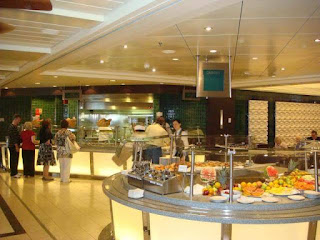 After lunch we went back to the Med Cnt and this time met up with Dr Andrew who was waiting to depart.  He was kind enough to take us up to the Senior Doctors cabin 3L194 where we would be staying.  Unfortunately our luggage did not arrive at our cabin and when I asked it appeared that it hadn’t arrived onboard.  We had a little rest and then a bit of wander and then Edward decided he was worried about the luggage, so he went back ashore to see if he could find it.  Obviously it was not there but he did have some trouble getting back onboard as somehow he got into the wrong line etc…..

Luckily, he managed to sort it our and gain re-entry to the ship.  By about 16h00 Bart was back and he despatched the Med Cnt Steward ABU to see if he could find our luggage.  Edward started to get really anxious and upset about the luggage not being delivered – scenes in his head of the theft and / or destruction thereof.  I left him in the cabin and went to see if I could locate it myself.

I went directly to Deck 2 reception where I found a bellman telling another guest that security had their luggage.  Immediately I knew that our cases were also with security as they were not labelled with a cabin number, just Med Cnt.  WE couldn’t immediately get hold of the security guy to release the luggage to us but by 17h45 all was sorted out and we were able to  get the bags to the cabin.

Just after 18h00 we went up to the crew deck to join Bart and the Med Team for sail away.  It was wonderful.  Just at sunset we waved goodbye to the Queen Elizabeth and Hong Kong and sailed slowly down the

channel, past massive towers of apartments and out into the open water and new adventures.  Spent a lovely long evening in the Officers Ward room ‘conversating’ with Bart and testing the red wine!