Today I allowed myself the rare pleasure of wandering around a beautiful city in the steps of a well loved fictional character – Commissario Guido Brunetti.  This affable though efficient detective is a figment of the imagination of an Italian author – Donna Leon.  She writes so convincingly of him and his family that after just a couple of books you feel as though you know him well enough to share him with someone of a like mind – or invite him and Paolo over for dinner!

So it was that two friends and I decided that on our next stop in Venice we would take ourselves to the Questura where Guido frequently looks out of the window of his office and we would see his view. 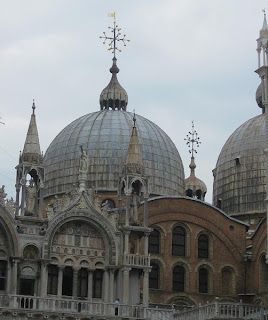 We started in St Marks Square and after a brief fight against the tide of tourists, we left the square behind and headed for CHIESA DELLA PIETA.  The tall white columns of the Church of the Pieta is no longer used for religious worship, but rather for worship of another kind  - mostly fabulous concerts of Antonio Vivaldi’s enchanting melodies.  This church is often referred to by the locals as Vivaldi’s church in honour of the fame he brought to the city through the music he wrote for the orphaned girls whose musical education he oversaw. 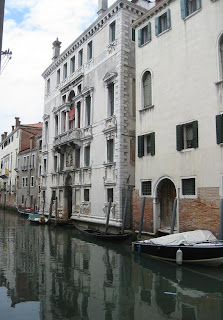 Over the bridge and we turned left down the small Calle del Dose and truly started to feel like we were walking in Brunetti’s footsteps.  The small street, Calle, reminds one of an English “twittern” as it is just that, a tiny gap between the houses which allows one to pass deeper into the labyrinth that is Venice.


As we had started out early there weren’t many people down this end of Venice yet and the streets were quiet and we had plenty of opportunity for taking nice photographs.


The after a short walk the Calle opened into the CAMPO BANDIERA e MORO.  This small square is a hidden gem.  Dominated by the restored 15th century building of deep brown brick with fabulous window boxes filled with flowers.

The opposite side is the Church of Giovanni in Bragora with a beautiful scalloped white facade and pale bricks.  It was not open when we were there but I would have loved to have gone in and had a look about.    From the plaque on the wall it is proclaimed as another haunt of Vivaldi’s. 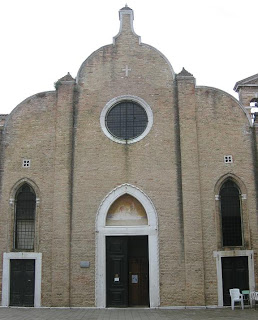 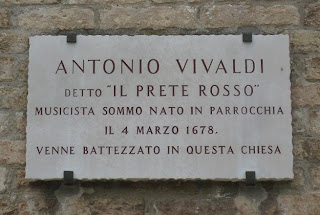 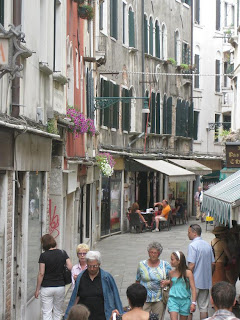 Exiting the palazzo to the right of the hotel and we found ourselves in the suburban street of SALIZZADA SANT ANTONIO.  It actually felt quite odd to be walking down a street in Venice with supermarkets and hardware stores and school supplies.

In fact it was so normal looking that we decided to stop for coffee at one of the typical side walk cafes – and we were served by its Indian owner.   The world it truly turning into and international village!  Coffee was great and so was the cake!

Moving on towards the Ponto Greci we grew more enamoured with the area at every turn.

We ambled along the Sant Antonio street, through  the Calle della Madonna and then out into the open and the  Ponto Greci – Bridge of Greci where there was a bar that Brunnetti like to frequent called "Ai Greci" but now goes but the unusual title of Greci Moka Efti Crazy Bar. 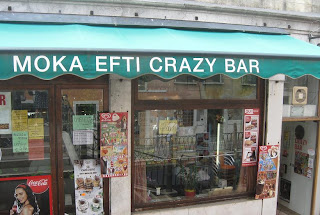 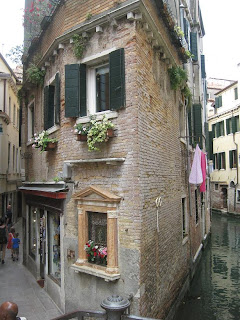 So back to the bridge we went and took the correct turn. 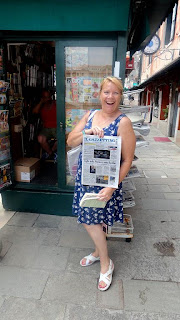 A short walk down the FONDEMENTA DI SAN LORENZO we passed a small newspaper stand where I gave into the urge to buy an “Il Gazzettino” which is the daily rag that Brunnetti likes to read. 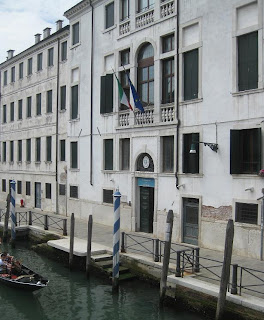 Well pleased with my purchase we walked on a little further along the canal side and there was the QUESTURA where Bruntetti has an office and spends a fair amount of time gazing at the view from his office window.  This encompasses the gardens of an old peoples and an early Gothic Palazzo Zorzi-Liassidi (now an hotel) and yet another church. 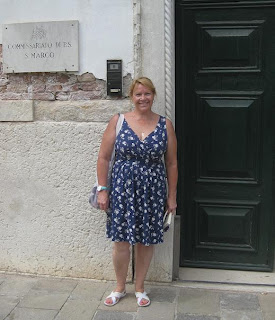 (Right = a very happy Brunetti fan outside the Questura.  Whilst we were there making loads of noise and taking pictures, the voice box behind me came on and someone whilsteled!!  We got sucha fright that we moved on post haste.  )

From here we wandered the twists and turns of the small Calles that lead into fabulous squares, past numerous churches, along enchanting canals and we were completely captivated by Venice.  Forget the tourist Square, the Gondola rides and the glass shops.  This is the Venice to visit!! 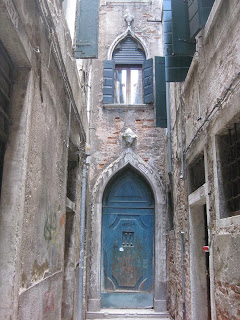 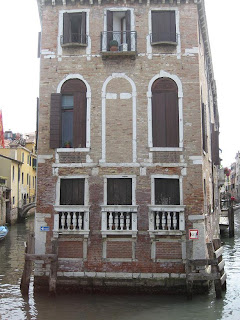 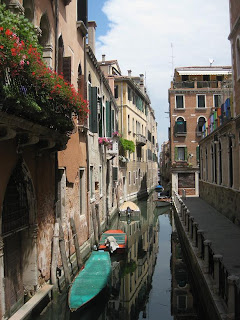